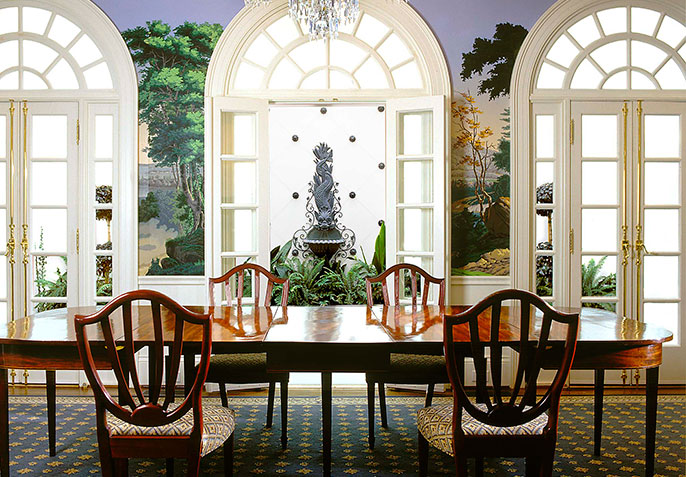 Charleston Garden
The American Sheraton-style sofa (ca. 1810) was made by Ephraim Haines of Philadelphia. Its simple design and elegant materials are similar to the designs found in Thomas Sheraton’s design books. It was purchased by the Foundation during the Edwards administration. The matched pair of carved mahogany English George III library chairs (ca. 1770) are among the few colonial-era objects in the mansion. Each is embellished in a curvilinear Rococo style. The backs are carved in an openwork design of flowing ribbons with central bellflower motifs. The skirt below the cloth seat has carved foliage scrolls. Purchased at a Sotheby’s auction, they were presented to the Governor’s Mansion in 2000 by Ms. Darla Moore.

The English Hepplewhite-style secretary (ca. 1810) is made of mahogany with oak and pine used as secondary woods. Originally the upper half of this piece would have been filled with bookshelves. At some date, the shelves were converted to sliding shallow drawers to hold linens. The upper bracketed crown with inlay and dentil molding as well as the two doors with raised oval panels containing inlaid satinwood are typical of the refined Hepplewhite style. George Hepplewhite’s preference for elegant lines and subtle wood embellishments are evident here. This secretary was once the Prime Minister’s Residence, Belfast, Northern Ireland, and was purchased by the Mansion Foundation during the Hodges administration.

The American Regency armchairs (ca. 1824) throughout the room were made in New York. Each chair features a hand-painted seasonal scene. From the Federal period (1776-1810) through the English Regency (1810-1830) and French Empire (1810-1830) styles, neoclassical influences resulted in a variety of designs for light and elegant chairs with painted decorations, spindle or shield backs and turned legs. These chairs were used for a variety of drawing room occasions from afternoon teas to musical recitals and were a fashionable alternative to heavier upholstered pieces. They were purchased by the Foundation during the Hodges administration.

The contemporary parlor-grand piano at the end of the drawing room was a birthday gift to Maude Busch Byrnes from her husband (James F. Byrnes, 1951-1955). Mrs. Byrnes enjoyed playing both for her family and official guests. It is a pleasant reminder that the mansion is a home as well as the official residence of the state’s chief executive.